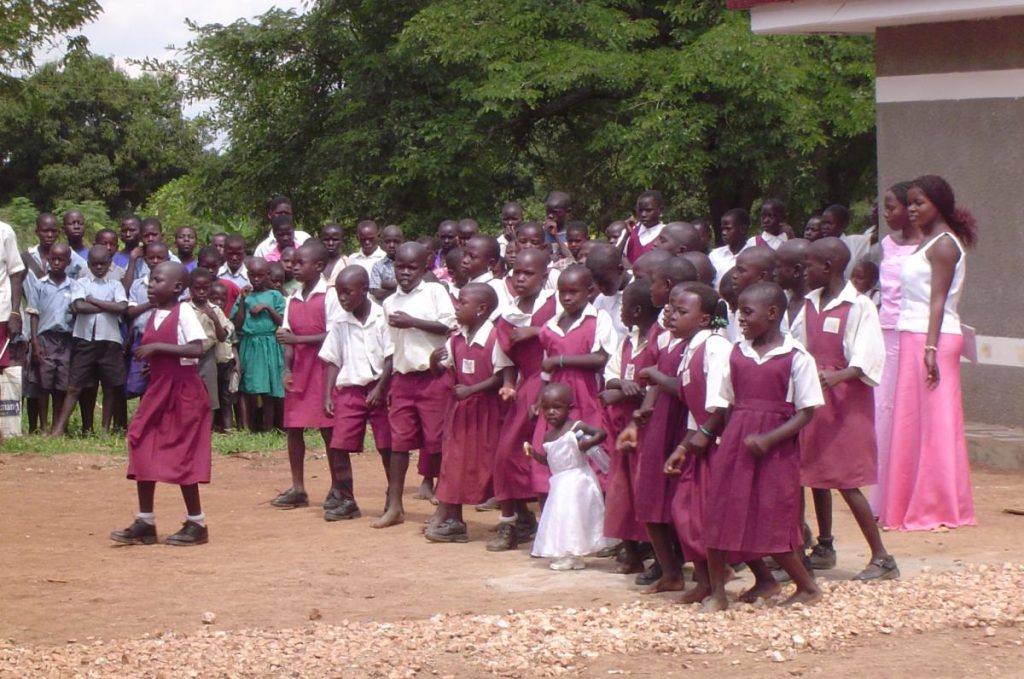 The KFI is working with High Adventure Gospel Communication Ministries (HAGCM) to carry out this project in Nakyessa, Uganda.

Context: Over ninety percent of Ugandan children drop out before completing their high school education thus leaving them without skills to become contributing participants within Ugandan society. Most often the cause is the lack of facilities and programs. The situation becomes exacerbated in rural areas such as Nakyessa where the cost to relocate to Kampala is inhibitive.

Assistance: Recognizing this critical need, The KIM Foundation International has provided the resources to construct a building for four Classrooms, two Teachers Rooms and an Administration Center that will support the A-Level Academic Development of eighty students. The work is being completed with local labor applying western construction methodology. 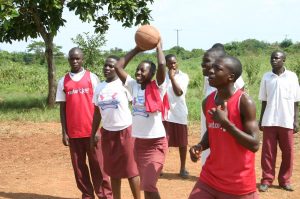 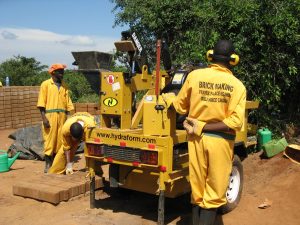 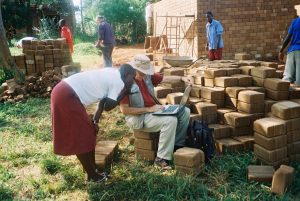 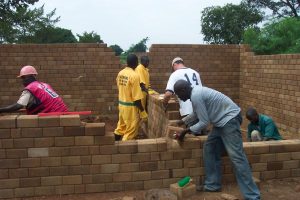 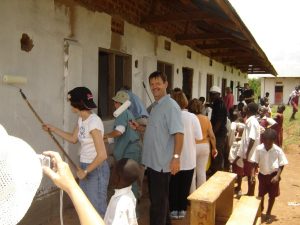 IT’S ALL ABOUT THE CHILDREN

The future of any country rests in the development of their children. Yet despite this knowledge, children continue to be the innocent victims of wars, diseases and inappropriate behavior of adults within their life and country.

Over the past two plus years, The Kim Foundation International has had the privilege of participating with High Adventure Gospel Communication Ministries (HAGCM) in reaching out to the children at the Nakyessa Day and Boarding School. Located deep in the ’Pearl of Africa’, Uganda, the school has become home for many homeless street children from the Capital city of Kampala, for many child victims of the wars of the country and for many children orphaned by the onslaught of AIDS. Today over seven hundred children, ranging in ages from five to seventeen either reside at or attend at the school.

Financial resources within the isolated village of Nakyessa are almost negligible yet without doubt a necessity to every planned activity. However, by itself, money is not the solution for the many complex issues confronting these victims. Current partner efforts in Uganda focus on empowerment; (the process of elevating a person or persons to accomplish what they could not do before). The process takes considerable effort, wisdom, grace, perseverance and above all time.

Almost three years ago, the Kim Foundation International gave water drilling equipment to drill water wells at the Nakyessa School which lead to the training of several youth. Considerable perseverance has been required as the Youth team drilled seven dry bore holes on the site. Success on the eighth attempt produced a flow of water which unfortunately was insufficient to serve the school. (NB Further funding is sought to hire specialized equipment to complete this well). A decision to supply and install two 10,000 liter tanks to harvest rainwater has supplemented some of the much needed water at the secondary school. Frustrations from these drilling attempts tested the resolve of partnering agencies, but everyone stood firm to model perseverance, endurance, trust that leads to encouragement.

Under the supervision of Ken McReynolds, a Kim Foundation International Director, the Nakyessa Medical Clinic has been constructed by unskilled local labor using innovative state-of-the-art construction technology. In an area dominated by centuries of superstitious witchcraft, discouragement and normality, the project demonstrated to the children and the villagers a work ethic, tenacity, and perseverance. Concurrent to the project, several youth received invaluable training in a wide range of vocational skills as they participated in the construction process. Today, the Clinic is financially supported by a Canadian Church and managed by the Ugandan medical community, resulting in medical support for Nakyessa School children and over 10,000 villagers within the district. Support from the Kim Foundation International enabled furnishing of the Clinic and the construction of a water collection system. An in-ground 15,000 liter cistern is fed by water collected from the clinic roof. Ultra violet light, run by solar energy, purifies the water for immediate consumption at the Clinic.

Empowerment activities at the school have been numerous. Complimenting educational pursuits is the development of life skills. Provision of water led naturally to development of ’drip irrigation’ and the cultivation of more than six acres of arable land, all by the students. Learning to grow pineapples, vegetables, maize corn and fruit trees has become part of the activities within the school. The gift of two motor-tillers has enabled the secondary students to till soil not only on the school property but also for widows in the village. The lesson of giving, not just taking, has become a major theme. The gift of eleven sewing machines has extended this concept of giving as students sewed clothing for most needy children in the Village of Nakyessa.

Close to 90% of the students completing secondary level (grade ten) until now drop out of school due to the excessive costs of attending an ’A’ Level School in Kampala. Through another grant by the The Kim Foundation International, Nakyessa’s first A-Level Classroom Building (4 classrooms) will be ready for a waiting list of eighty students in February 2008. This academic focus will compliment a new 3-classroom A-Level Science building that has been given by HAGCM and partnering North American churches. Nakyessa will have A-Level education for the first time.

The Science Building, using an environmentally friendly system of compressed earth bricks formed by a brick-making machine, was constructed by a team of Ugandans working along side a team of Canadians and Americans. The same roof system applied on the Clinic was successfully duplicated, only this time by Ugandans (a great feat). Not only is technology being transferred, the resulting relationships has enabled deep mentoring.

The four-room A-Level Classroom building is in the final stages of completion. The design and construction of the roof will reflect the Science Building, resulting in another successful transfer of a technology not previous familiar to Uganda. Even more amazing is the use of local labor applying up-to-date technology. Both these projects are the result of Canadian professionals working along side young Ugandans as mentors over the two and a half years. The fruit of empowerment is slowly becoming a reality.

During three working field trips, teams of experienced Canadian teachers have worked along side teachers, sharing instructional techniques and bringing materials for the primary and secondary divisions. All children in both divisions have been given the resources and programs for physical education (basketball, volleyball, net ball, football, etc).

The many facetted skills of people on the four field trips showed staff and students the art of making blackboards and shelves for the school. Not only did these activities provide a range of vocational skills development, they have provided students and staff with a means of earning. A project on pottery is leading the students through the skill of producing pendants as an introduction to micro business in the marketplace. Fruits of the first pottery venture gave all students a full meal with meat and vegetables. The presence of the motor-tillers and brick making machine has led to small engine education. The gift of several power tools and hand tools has given students the opportunity to learn woodworking.

Academic development remains a critical focus for Primary students being augmented by the development of Life Skills for Secondary students. Learning work and team skills occurs in the many self-sufficiency activities initiated at the School. Cooking classes are preparing students to live on their own. Since the students tasted their first yield over four acres of land has been reclaimed from the jungle and cultivated by the students. Tomatoes, lettuce, chard, onions, spinach, Irish and sweet potatoes and sweet corn have become more common in student meals. The small herd of milk goats is providing milk to many children for the first time. The new herd of meat goats will give most children their only meal with meat during the year. The produce of the hennery has already become self-sufficient with extra produce from the flock being used to finance the second flock. Four acres of maize is yielding food for a year.

Most rewarding to see over the past two and a half years has been the attitude of the surrounding villagers towards the School. Slowly changing from one of resistance of the school to one of adoption, hope has permeated this isolated village as parents and children alike understand and embrace change and growth. Villagers now endorse the many opportunities at the school, taking accountability for support. At the ceremony commissioning of the Clinic, Mr. George Keyeune, First Secretary to the President related to the gathering ’Remember that this Clinic is yours. It is neither owned nor operated by the Canadians. It is a gift for the School and the Village’.

Yet so much is left to do including dormitories for Primary, Secondary and A-Level students, libraries in each division, development of a water system for the entire complex, replacement of shanty classrooms and the development of safe kitchen facilities (that are environmentally friendly adequate to feed the children three meals a day, an increase from one meal.